Have you recently shown up to a depo and realized the “court reporter” didn’t have a stenography machine?  You might have thought, “Wow, the court reporter doesn’t need one of those little machines anymore.”

The hard truth is you have just been part of a bait-and-switch scheme that may cost you your case.

Currently, there is a practice happening where unlicensed court reporting agencies, who claim they can’t find a licensed stenographic court reporter, are sending in a notary public to digitally record the deposition and have it transcribed later.

The Court Reporter Standard Certification Program (CR) provides statewide certification for persons in Arizona who are qualified to be certified.  Code Section 7-206 governs court reporter standard certification and applies to any person who records and transcribes a verbatim record in any sworn proceeding by means of written symbols or abbreviations in shorthand or machine writing in Arizona pursuant to Arizona Revised Statutes Title 32, Chapter 40.

Who is actually preparing the transcript if a Certified Shorthand Reporter didn’t show up? Protecting your court reporting record.

These unlicensed agencies oftentimes send the digital recording to multiple transcribers who sometimes are located outside the United States.  The person showing up calling themselves a “court reporter” is not the one who transcribes the depo.  If your Arizona deposition transcript is not prepared by an Arizona Certified Shorthand Reporter, your deposition might not be admitted into evidence. 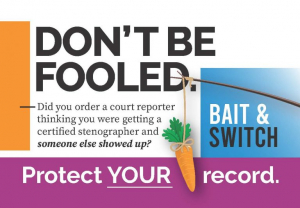 This deception is happening nationwide.  In a recent case in San Mateo County, In Re: McIntosh, Case Number SC023606A, Honorable Judge Scott upheld the Code of Civil Procedure and denied the admission of a digitally recorded deposition not prepared by a Certified Shorthand Reporter.

“…[W]ith regard to the deposition of Mr. Dirickson, that it was taken pursuant to the Code of Civil Procedure 2025.340 for audio and video recording but was not stenographically transcribed pursuant to CCP 2025.340(m). It was simply given to a — even though Mr.  Dirickson was sworn in by a licensed notary, Cindy Cobb is simply a transcriber, not a stenographic transcriber as required by law.

Meaning, a certified shorthand reporter.  So, the deposition of Mr. Dirickson would be inadmissible for — inadmissible on those    grounds.”

To make sure this doesn’t happen to you:

Remember, you have a right to object to the deposition officer’s qualifications.

Lastly, Arizona Certified Shorthand Reporters (commonly called “court reporters”) are licensed by the State of Arizona and have a board that was established to protect the consumer, YOU.  The court reporters boards throughout the country claim they do not have jurisdiction over these companies, who are unauthorized to provide professional court reporting services according to current Arizona law.  If you have a problem with your transcript or deposition officer who is not an Arizona Certified Shorthand Reporter, you will have no recourse.

If you have been subjected to this practice, please consider filing a complaint with the Court Reporters Board of Arizona. 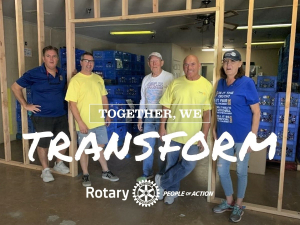 As we all begin to take a deep breath, we find time to soak in the final statistics of an amazing April of Rotary in Arizona.

Rotarians held over 60 projects all over Arizona.  Nearly 1,000 lbs. of trash were picked up in the Verde Valley, so much food was raised in Goodyear that American Furniture Warehouse is temporarily storing the excess, and (my personal favorite) food banks and schools were renovated and cleaned up in Chandler! Over 1,000 backpacks were filled with school supplies for Title 1 schools – pencil pouches, masks, hairbrushes, notebooks, so much more! Gardens and parks were cleaned up all over the state! Trees were planted! Hygiene kits were packed! Peace poles were brought to cities. The entire community in Prescott came together to raise money for local food banks.

Was thinking out of the box always comfortable? Oh hell no.  Was it at times exhausting?   You betcha.  But the tragic ramifications on the impoverished due to the massive shutdowns from Covid screamed for Rotarians to quickly pivot, to step up, to be pressed to the limit.  After 18 months of tirelessly serving our communities during the peak of Covid, this fast-tracked behemoth undertaking was the brainchild of our outstanding District 5495 leadership and District Governor Elizabeth Mahoney, and Southeast Valley leadership of ADG Ed Anderson, as they encouraged, pressed, and supported we club presidents and our boards across the state to propel Arizona out of the starting blocks and rapidly emerge from the global pandemic.

In an overwhelmingly short time, Rotarians embraced massive undertakings, engaging all generations. We had young children of Rotarians out at food drives and parks, Jr. High and High school Interact students at projects all over the state, Rotaractors in every city of the state, and positive, upbeat Rotarians even into their 90’s enthusiastically jumping into the challenge.

Throughout history Rotary has stepped in and manned the front lines of every epidemic and catastrophe.  Thanks to selfless Rotarians and those who support us this has been a season to remember, a season to be proud of, a season of Service Above Self.   This is who we are.  This is who we have always been.

Please, come join us. Your life will never be the same. 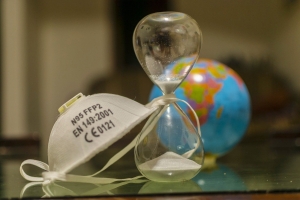 The current uncertainty of the Covid-19 pandemic is not relenting.   Stay-At-Home orders, while relaxing in some jurisdictions currently, are predicted to be phased in and out throughout 2020 and beyond depending on expected subsequent waves of the virus.

Courts nationwide have entered orders rejecting extending deadlines and are now requiring that depositions be taken by remote means.   It is time to move forward accepting that our current circumstances are going to be here for a while.

Federal Rule 30(b)(4) provides that “[t]he parties may stipulate—or the court may on motion order—that a deposition be taken by telephone or other remote means.”  Arizona RCP mirror this language.

As discussed in our article Momentum: Use It or Lose It, it is predicted that dockets will be backlogged for months.  One must now seriously consider the devastating domino effect that any further delay in taking depositions will cause to their client’s matter, and their reputation.

There are practical considerations a litigator will face when taking a remote deposition.  Instead of hoping you’ve read the right article, let us do our job.

We walk counsel and their staff through these logistical nuances each and every day.  Our platform is encrypted, password-protected, and is FedRAMP (Moderate) and SOC2 rated.

Obviously, remote depositions require integration of various audio and video equipment.   Not to worry, we’ve got your back.  Whether there are 3 parties or 30, at no additional charge we reach out and conduct practice runs with you, opposing counsel, and the witness to test technology, share best practice, and answer questions.

As impartial officers of the Court proficient with video conference technology, we help ensure the propriety of the process.   There are best practice protocol that you MUST require be carried out, such as the certified court reporter having control of all hosting functions, disabling any chat function, monitoring band-width and audio integrity in real time, simultaneously marking exhibits, and video recording only on-the-record testimony, just to name a few.   There is also a plethora of experience we bring, contributing to the confidence that you are geared up and on point for remote depositions.  These are standard functions that our elite team welcomes providing to ensure the integrity of each proceeding.

Please, do not be intimidated or put off by this technology.  This is what we do.  This is what we’ve always done.  We are your certified technical support assistant from end-to-end for all your remote video conference proceedings. 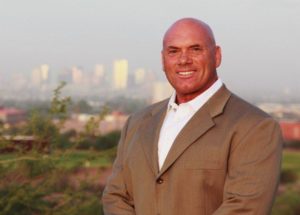 Herder & Associates, a prominent AZ court reporting firm, is now offering presentations that help highlight the role of court reporters and how to conduct depositions effectively. Titled “So You Think You’ve Heard it All? Everything you need to know to take a Deposition,” company owner Marty Herder relies on his years of experience as a court reporter to provide information about best practices in the field.

These free presentations are used to assist law firms in teaching young associates the do’s and don’ts of taking a deposition. Think you’ve heard it all? Think again. Marty Herder, President of Herder & Associates, brings 37 years of experience in over 5000 proceedings to your team, sharing nuances and tips that are unique to the deposition arena. Mr. Herder is a Past President of the Arizona Court Reporters Association, Court Reporting Program Advisory Board Member – Gateway Community College, Official Reporter for the Arizona Independent Redistricting Commission, Former Arizona Delegate -National Committee of State Associations (NCSA), mentor and guest speaker.

Depositions are often a crucial component of preparing for a case, but small mistakes made by attorneys and firms can prove problematic later in the case.

?All too often,? Herder says, ?A law firm can start off on the right foot for a deposition following a proven path for success. Having worked with hundreds of depositions, I?ve had the privilege to see what makes for a smooth and effective process.?

The topics covered in the presentation include:

In addition to basics of procedure, these presentations also outline tips for success based on Herder?s personal experience working with many cases. For law firms looking for a great adjunct presentation to supplement any in-house CE programs, seasoned veteran Marty Herder provides an innovative and beneficial program to help law firms get the most out of their deposition process.

Herder & Associates is a full-service court reporting firm based on Phoenix. The company has earned a reputation as a local leader and been a popular choice for attorneys who need reliable and experienced court reporting help. To learn more about services offered by the firm, visit courtreportersaz.com

President Obama used his sixth State of the Union address before Congress to reiterate his call for political compromise.?

Reactions to the SOTU were predictably partisan and non-productive.??

It is difficult for the American people to see where?anyone on either side of the aisle?is listening to “We The People.”

The 10% extreme fringe of each side of the political spectrum continues to drown out the majority in the middle.

To quote Dave Ramsey, “If you are waiting on the President or Congress to fix your life, your life will continue to suck.”